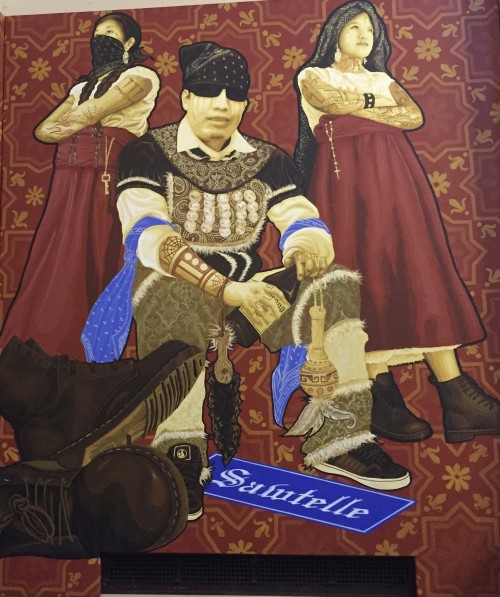 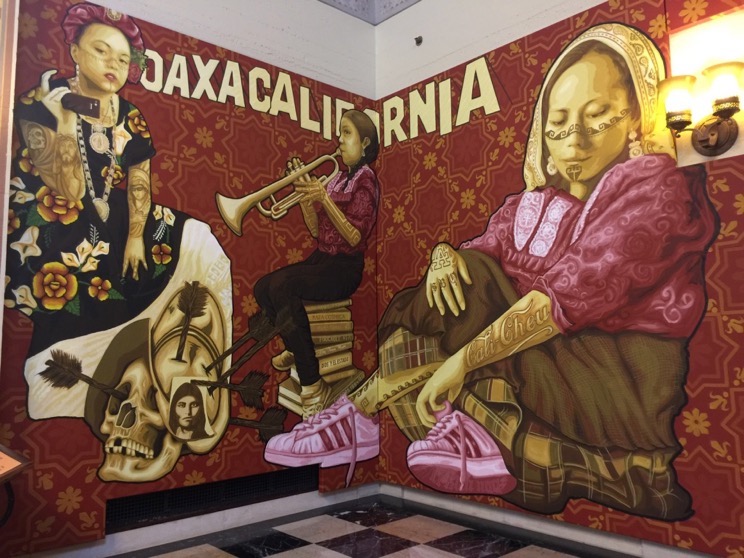 I was so blown away by the new murals, painted by Oaxacan collective Tlacolulokos, recently placed in the rotunda at Central Library downtown LA. The murals represent Oaxacan/Zapotec culture in L.A. and speak to the complexity of what it means to be indigenous and a Oaxacan migrant in the city of angels. I often hear indigenous languages spoken when I walk through the MacArthur Park/Pico Union neighborhoods while conducting research, but little did I know there were over 1/4 million speakers of the Zapotec language in L.A., that come from Oaxaca alone. 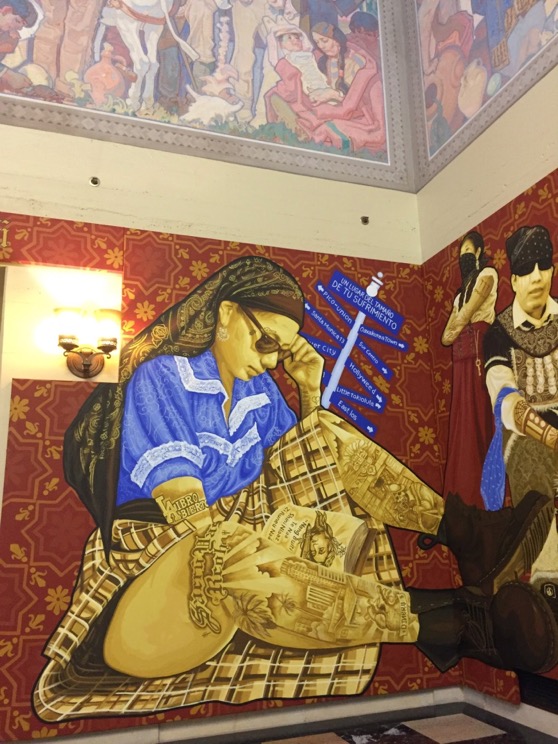 When you walk into the library rotunda, these striking images of contemporary indigenous culture are placed directly below the murals painted by Dean Cornwell in 1930 – a romanticized, more shallow depiction of California history – giving us 2 very distinct perspectives on immigration, identity, colonialism, and dominance. In this image, 2 indigenous female figures represent more than a century worth of gender politics. Look up at the Cornwell mural where a native mother is placed in the bottom right hand [obscure] corner, almost invisible, passive, head down, while in the contemporary Zapotec version she’s prominent, strong, has vision, and is studying where she comes from, her boots anchor her, like roots, though her tribe is scattered around different neighborhoods of L.A. – Oaxakorea Town, Santa Monica, South Central, Hollywood, Little Toklolula, etc., “a place the size of your suffering” as the street sign connotes. 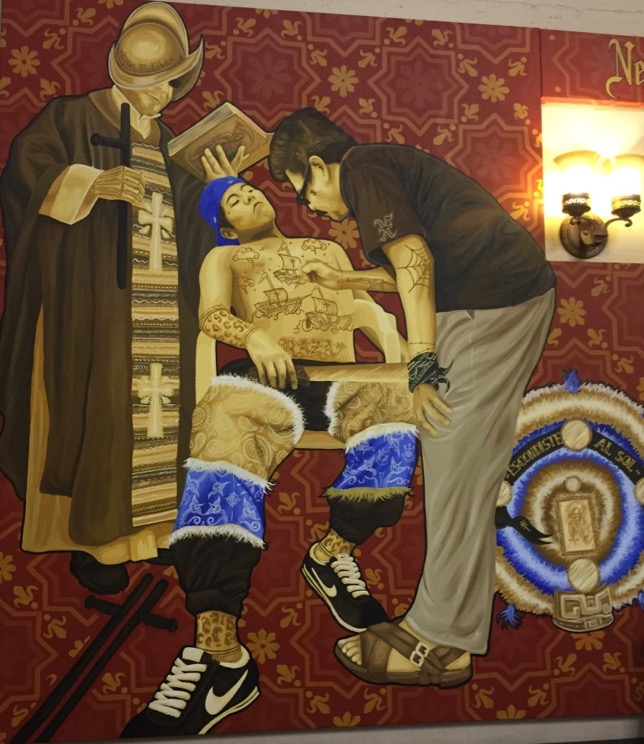 There’s plenty of overlapping symbolic codes – references to colonial dominance and traditional icons contrasted with contemporary identity-making – rediscovering elements of pre-Hispanic culture helps make sense of indigenous lives in the new world. Polarities coexist side by side, as they do in the lives of these migrants: a conquistador’s helmet & a Dodger cap; a pair of Nike tennis shoes & traditional huaraches; traditional Zapotec dress, jewelry and accouterments & shades, bandanas and Dockers; a police baton & a machete; rosaries & cell phones; tattoos of pre-Columbian and colonialist imagery & scenes of LA neighborhoods; a stack of books that include the Cosmic Race & Foucault.

Some viewers will be offended by the gang imagery. They’ll say it promotes gang culture, highlighting the negative vs. positive aspects of the community, etc. Yet, there’s also another side to this story, and that’s where art takes us – someplace else. This work challenges the way we think about words and imagery. As unique individuals and members of tribes, we’ll assign different meaning to the iconography. Since nothing is as it seems, it can take us beyond the bubbles we inhabit, into another community’s cultural realm, hopefully to gain a deeper understanding and compassion toward humanity.

These murals merit a dissertation. Hats off to the 2 artists that make up the Tlacolulokos collective, Dario Canul and Cosijoesa Cernas both natives of Tlacolula, Oaxaca, México.